Handing over the baton of science 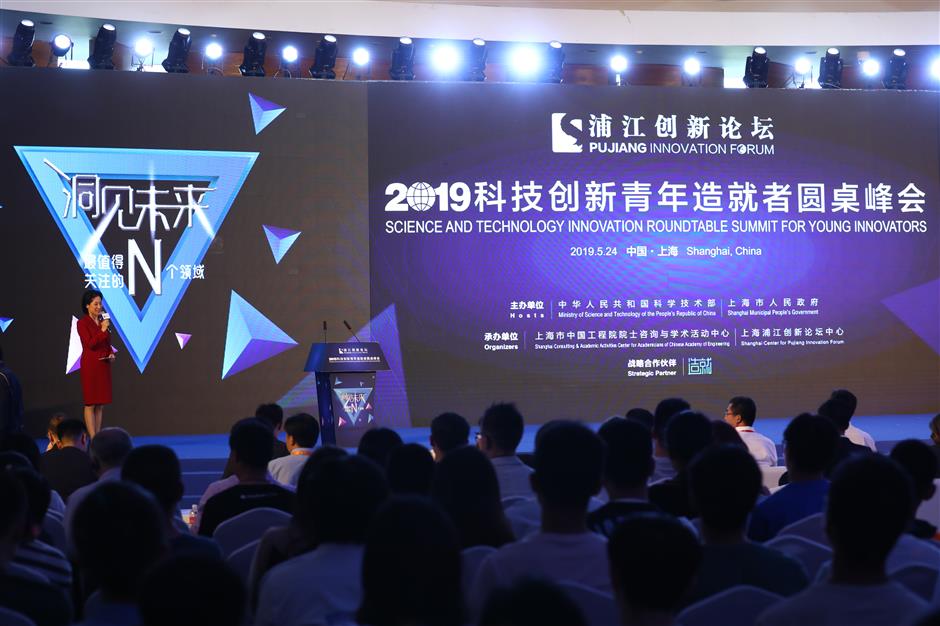 Ten outstanding young innovators shared their futuristic visions, ideas and research results in different fields in a roundtable summit yesterday at the Shanghai Science and Technology Museum, which kicked off the three-day Pujiang Innovation Forum.

The forum, founded in 2008 by the city government and the Ministry of Science and Technology, takes innovation as its theme in line with national demands for an international vision.

It is dedicated to building a platform to exchange ideas and spread advanced concepts. It also facilitates cooperation among government departments, industry players and research institutes, and is a forum where new policies are released.

“Shanghai acts as a ‘living room’ where global technologies are gathered and innovative ideas are exchanged,” said Luo Dajing, deputy director of the Shanghai Science and Technology Commission. “And the forum is at the center of this living room.”

This year’s forum, with the theme of “New Vision and New Future of Science and Technology Innovation,” has four special sub-forums and 11 themed sub-forums. 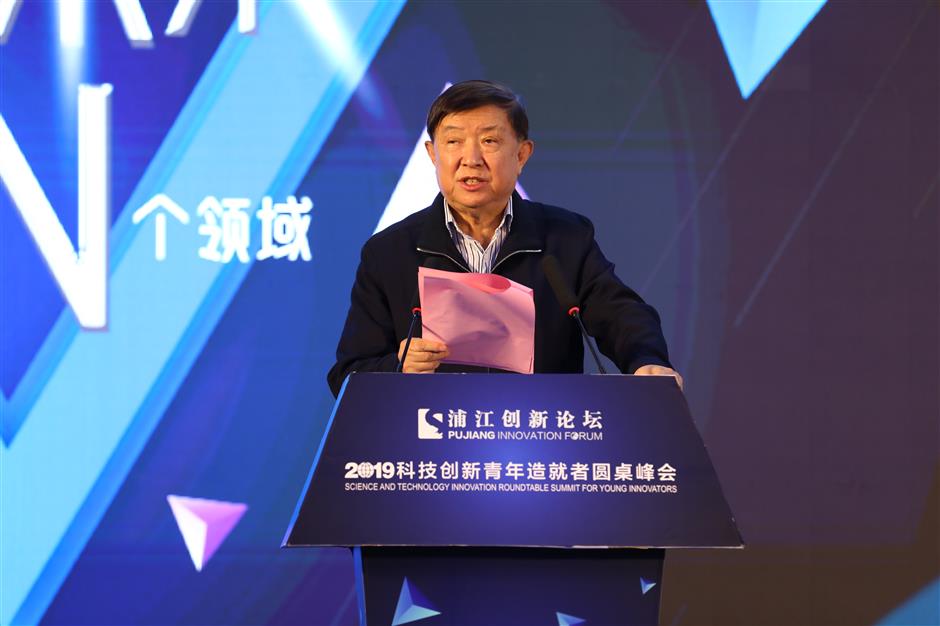 Aiming to be a scientific and technological version of the Davos World Economic Forum, the Pujiang Innovation Forum is more international this year, with nearly 150 keynote speakers from 23 countries and regions. Researchers and scholars account for 46 percent, entrepreneurs 39 percent and the rest are government officials. One-third are foreign.

Well on its way to become innovation center with global influence, Shanghai has created great ecosystem for innovators. 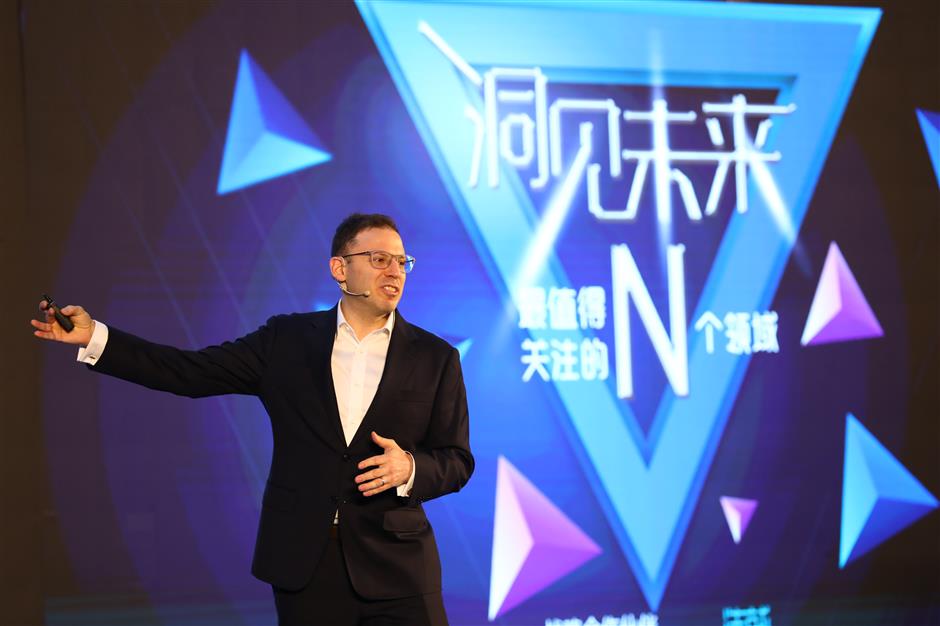 “Shanghai is specifically fantastic place for science,” said Jeffrey Erlich, assistant professor of neural and cognitive science at NYU Shanghai. “It’s clear that the government realizes how important science is for the future, for China and the world. So I think it’s good to be a scientist here, where people have a lot of respect for scientists.”

The 10 participants at the Science and Technology Innovation Roundtable Summit for Young Innovators are all aged below 45. The summit is designed to be a stage for the young generation’s power in science and technology innovation.

Young people and their ideas shine bright like gold, and it is vital to bring them together to create the city as an innovation center with global influence, said Xu Guanhua, chairman of the Pujiang Innovation Forum. “The forum is an important platform for young innovators to demonstrate innovation.”

Shanghai political adviser Li Yiping said: “We will build an ideal place for young talent, and welcome them to join us to build an innovation center here in Shanghai.” 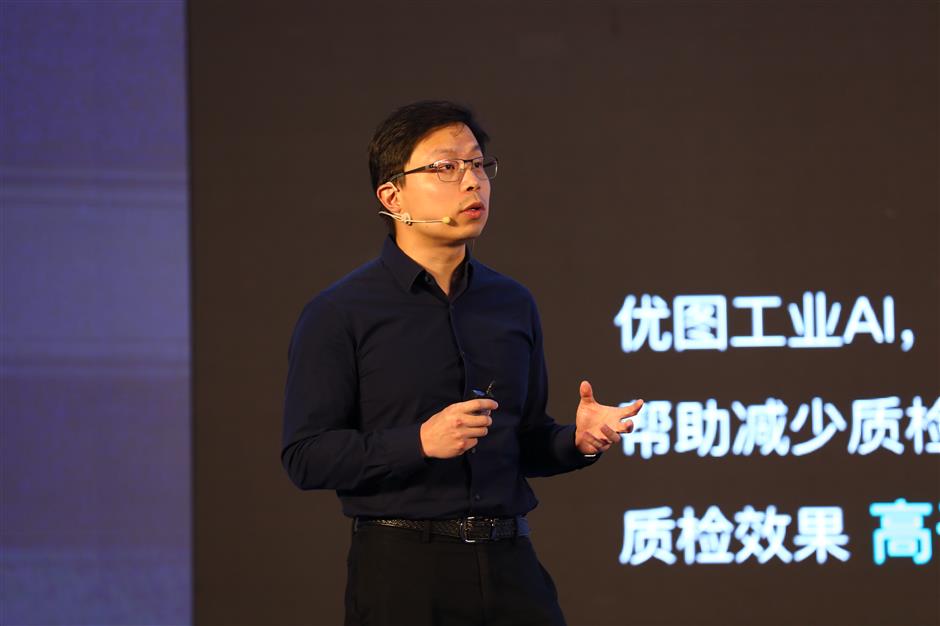 They shared their views of the 10 leading industries and cutting-edge technologies that will reshape our world, such as artificial intelligence, life sciences and clean energy.

“I believe if the (Shanghai) government can provide great support for science and technology, emerging industries and basic industries,” said Jia, “it will attract many talent to flood in. From enterprises’ side, it’s not correct for them to take their employees as ones who only create productivity and value for them.” 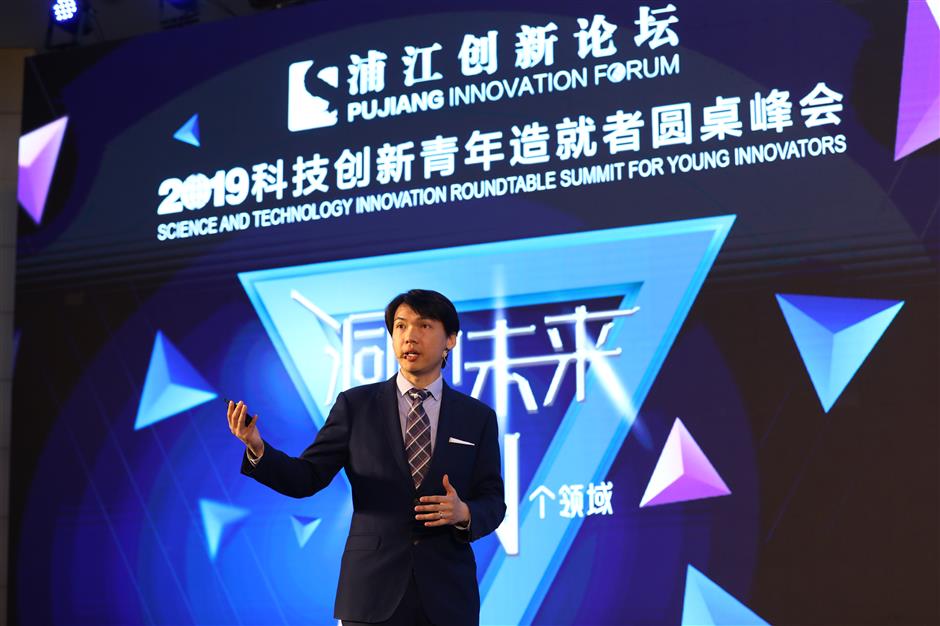 “Young people need space for growth and the enterprises should provide them with more opportunities and ways to try different work in different fields to give them more room for learning,” said Benjamin Tee, a Singaporean scientist who helped develop electronic skin technology.

“I think what’s happening, not just across Asia but all over the world, is the general lack of appreciation for how scientists are changing society. We really need to start education, basically creating the passion, lighting up the fire in young children,” Tee said.

“Children don’t see science the way old people like me do, we need to create environment that is protective, conducive and encouraging. So, to nurture the young minds, we have to really think about how to do that,” he added.

Jia, leader of Tencent’s Youtu X-Lab that focuses on machine learning and AI, believes AI should be used for the good of the community, to change the negative image of robots.

Many low-end, labor-intensive factories find it hard to find workers, but many of those tasks can be done by robots. Also, robots are perfect substitutes for high-risk jobs. 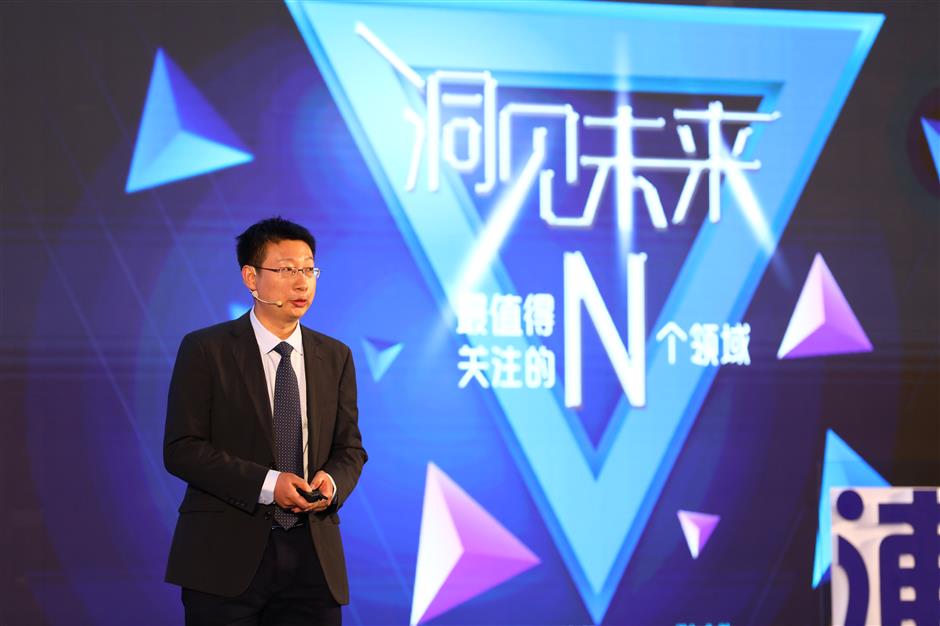 Hua Changchun, dean of the Institute of Artificial Intelligence and Robotics at Yanshan University

“We should consider guiding people to high-value jobs,” he said.

Hua Changchun, dean of the Institute of Artificial Intelligence and Robotics at Yanshan University, said: “Unmanned systems can bring a safer world.

“They can be used in a variety of disasters. Emergency treatment in high-risk scenes, which require super-precise work through remote operation, is the trend.”

Jia also said the lab worked with police in Fujian Province to develop a “searching for lost family members” system, embedded with facial recognition technology that can recognize a person even after years. So far, it has helped unite more than 1,000 families.

“After we participated in many charity events and learned about such group’s needs, our research and development team volunteered to do this project,” said Jia. “We hope our facial recognition technology can help these families and society.” 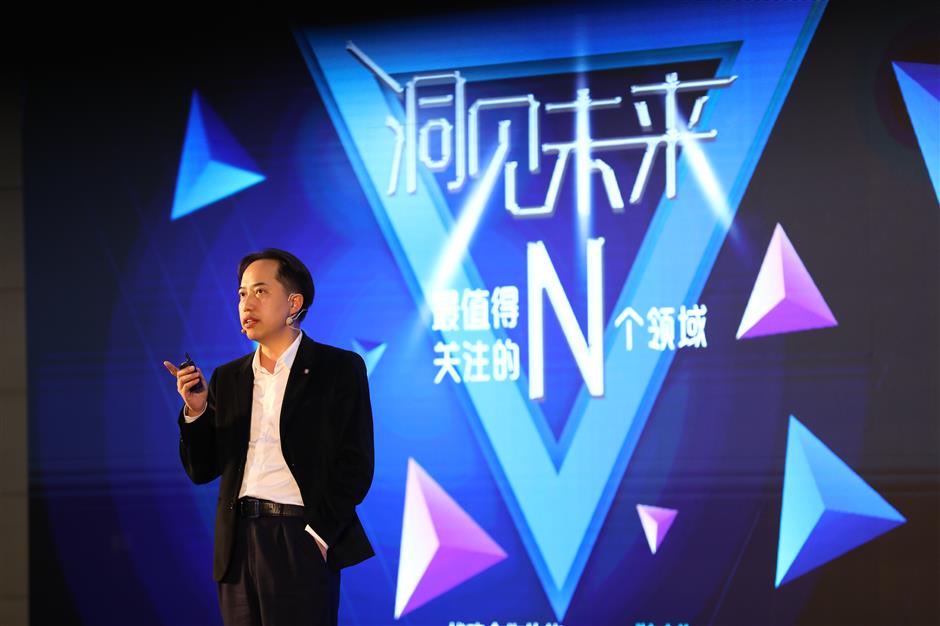 Chen Zhongwei, professor of Chemical Engineering at the University of Waterloo and a fellow of the Canadian Academy of Engineering

“It is what we must chase,” said Chen Zhongwei, professor of Chemical Engineering at the University of Waterloo and a fellow of the Canadian Academy of Engineering. “In Europe, after 2025, vehicles purely powered by internal combustion engines will go out of the market. The biggest problem caused by traditional fossil fuels like coal and gasoline is that they bring great pollution to the environment and have large emissions of greenhouse gases.

“With rising living standards and progress on science and technology, we must try our best to reduce the usage of fossil energy,” Chen said. “In the following one, two or three decades, we will find a growing and clear trend of energy transforming from fossil to new energy.” 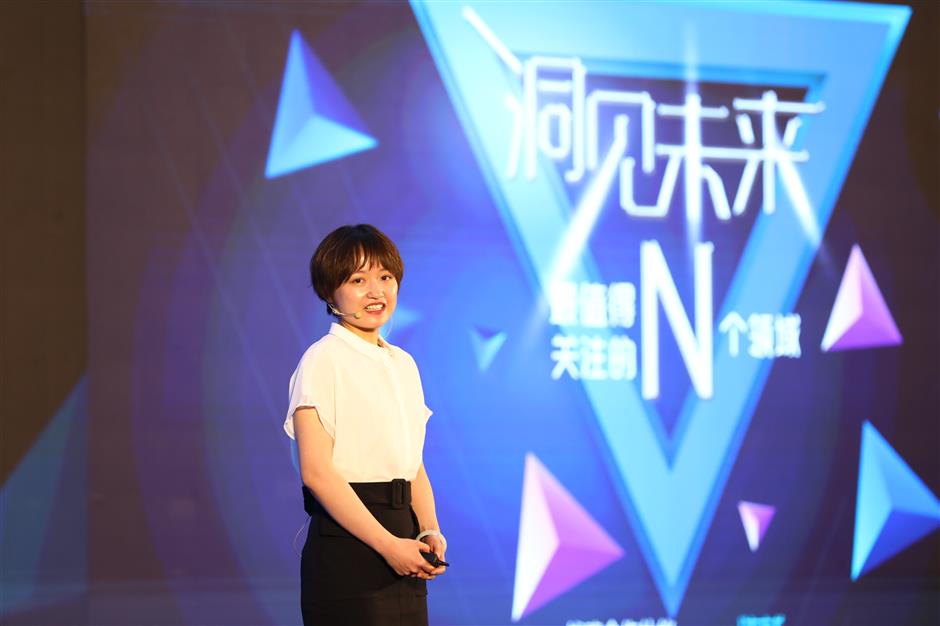 Wan Ruixue, post doctoral student majoring in structural biology at Tsinghua University, hopes her study in the structure of proteins can help understand the cause of diseases and develop new approaches to treat genetic diseases.

Shanghai’s great science facilities, such as the protein facility, have helped her a lot.

Jeffrey Erlich, assistant professor of neural and cognitive sciences at NYU Shanghai, shared his study trying to discern how our brain work.

Evangelos Tatsis, a researcher from the Institute of Plant Physiology and Ecology under the Chinese Academy of Sciences, shared his study of the relationship between plants and medicines. He said he hopes to combine biomedicine and traditional Chinese medicine.

Benjamin Tee from the National University of Singapore focused on bio-inspired sensory systems and the future of Internet of Things. 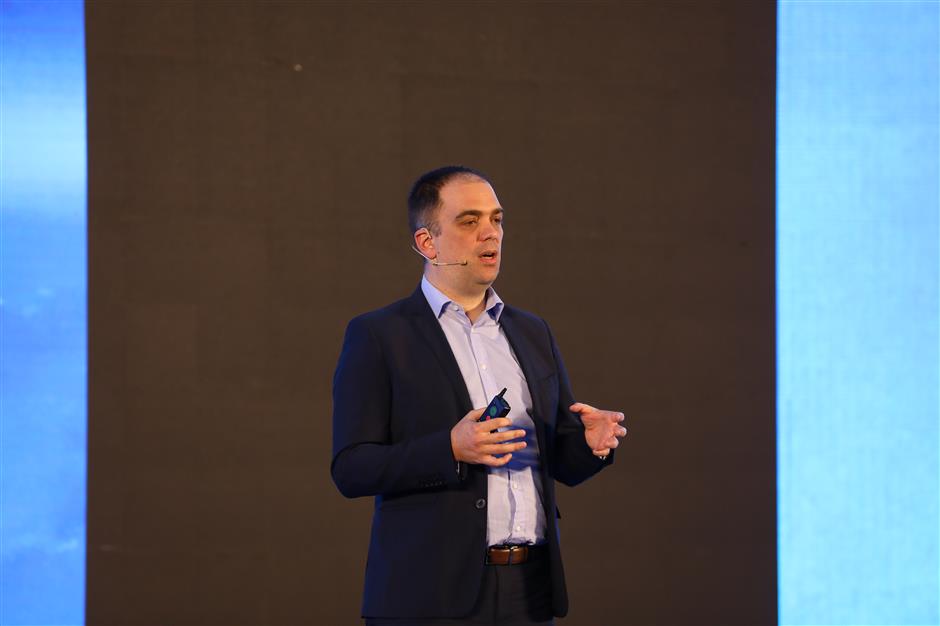 Evangelos Tatsis, a researcher from the Institute of Plant Physiology and Ecology

Xiao Fei, chairman of Rentian Group, talked about what we can do in the era of 5G.

BeiDou is used in 80,000 buses and 2 million cars, as well as most Chinese-made smartphones.

China plans to start building a global positioning, navigation and timing system since 2020, which is expected to be completed by 2035. 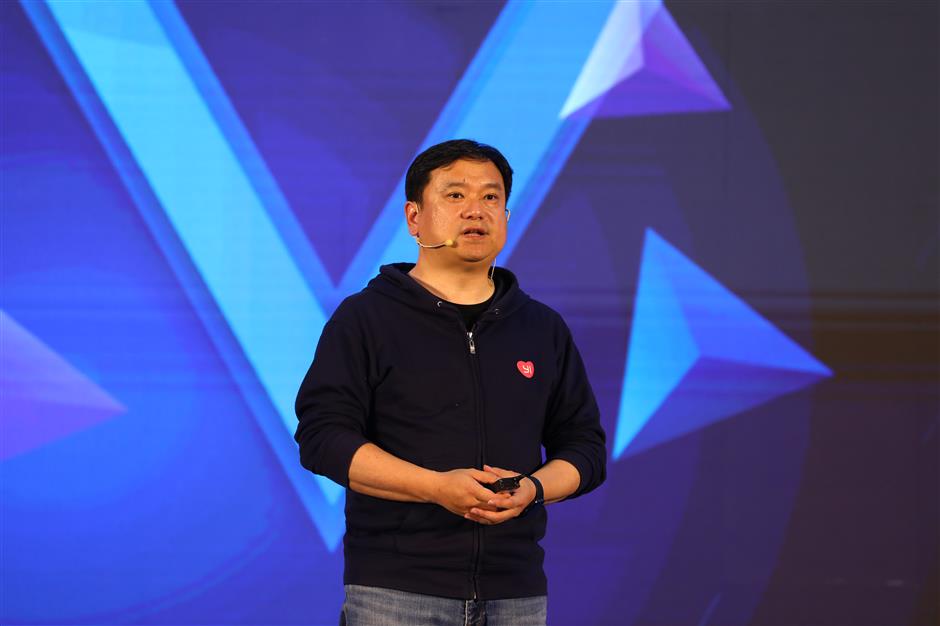