Director Lu Xi continues sharing his knowledge. (The following is the interview record)

Zhang Jiansong: We have just talked about Mars colonization. Do you consider it promising? What are the difficulties?

Lu Xi: Mars Colonization is a very hot topic, from science fiction to movies, and in everyone’s after-dinner talk, which does draw much attention. I think that in the next few years, we are definitely expected to travel to another planet. Mars, as our closest neighbor and the sister planet of the Earth, will inevitably become the first choice. It should be said that scientifically, we need some certain process to terraform the environment of Mars; technically, we also need to make a lot of preparations before traveling to Mars; and from an engineering perspective, we may be able to achieve it in three steps. Based on our assumption, the first step must be to send robots or some equipment to Mars for related experiments. Whether to change the environment or create conditions for humans to live on or cultivate some plants or something, you must send some pioneer teams to make some preparations. This is definitely the first step, but it’s hard to say how long it will take, maybe decades or hundreds of years, or even longer. The second step is to further create a suitable living environment. Human beings simply need water, oxygen, living space, safety protection, etc. They also need treatment when getting sick. Water and food, as well as oxygen, are essential for survival. The second step is to make some partial environmental transformation, or to create a closed environment with the self-circulation of the elements to maintain life. In this step, it may require a small number of people in the later stage, like 1-2 or 3-4 people to perform such task as the operation of a scientific research station. The third step then comes to the construction of the Mars cities that everyone including Elon Musk has been talking about, which will be at a very large scale. Only when the construction of infrastructure, consumables, and necessities for human survival reaches a certain scale can the colonization plan at levels of city, town and village be truly realized. For now, this process may be very long-lasting, but it can definitely be expected in my opinion. This is also the driving force of our scientific development. Having such a common goal and moving forward together towards it, this provides an inexhaustible source of motivation for our scientific and technological growth.

Zhang Jiansong: Director Lu, as a young expert, can you talk about how you chose the career of spaceflight, and what was your deepest feeling in your career? As a deep space expert in exploring Mars, what do you want to say to our audience and listeners?

Lu Xi: Perhaps everyone once had a dream of being a scientist in childhood. I have asked many children, and they all said that they wanted to be a scientist when they grew up. Scientists may vary in industries and professions. My father was in the Air Force, so I always wondered if it was possible for me to be a pilot or engage in the work related to aviation when I was a child. Later, after graduation, I entered the aerospace institute. Of course, there were some coincidences that I sent my CV to many units including the aerospace institute. Later, as my major shared some similarities and there was also a need for personnel, Shanghai Institute of Satellite Engineering employed me. At that time, the deep space field was in its infancy. Some of our early work including the later demonstration of deep space exploration and the demonstration of this orbiter was just beginning then, which was a stage requiring new blood and joint effort. Just at such perfect timing, I joined the deep space family. From the dream of a scientist during childhood, to the specific major in the course of study, and to such selection of career and position when I was really working, there might be some connections and necessities in it, but it was also partially driven by historical timing, opportunities at the time, and the contextual background. Looking back to our journey, we feel that the engagement in aerospace, especially deep space exploration, still requires a certain degree of willpower and patience, and a firm belief. The deep space exploration mission itself has a long demonstration test cycle due to its difficulty, and it must be carefully demonstrated before it can be implemented. Second, the implementation cycle of each deep-space exploration mission is also very long. In general, a satellite can be delivered to and used by satellite users a few months after launching. However, it would take nearly 7 months for our Mars mission this time to merely fly, followed by a series of operations. So, the actual scientific exploration will be a year away. This is significantly different from our usual work with satellites and spacecraft. For deep space exploration missions, the designers and their teammates must have the same strength, belief, and perseverance. Now my colleagues are right doing so. They are exerting their efforts in supporting our country’s space dream with their deep space dreams and finally facilitating the realization of the Chinese Dream.

Zhang Jiansong: Judging from our current scientific knowledge, the Earth is still the only planet where life exists, and the Earth itself is also a planet with a living system. I feel that we should protect and care for the Earth, our only homeland while exploring Mars.

Lu Xi: I strong agree with that point of view. We had some science popularization activities before to share with children about deep space exploration or Mars exploration. I remember when I was sharing this topic, the last slide of my PPT was also our Earth, which intended to tell the children that although everyone has such interest or curiosity to fly into space, but looking back, the Earth is our only home. The safety of Mother Earth or its sustainable development requires our prime attention. In fact, the scientific goal of Mars exploration itself is also to carry out comparative planetary studies. Through the comparison of the characteristics of Mars and the Earth and the modeling of some possible evolutionary processes, we may be able to see in what form the Earth will change. If Mars is the past or future of the Earth, how can we slow down some bad changes on the Earth and keep it in good operating condition for a longer time? This is also an important purpose and goal of deep space exploration. Although we aim to build a second home, we must also protect our first home, or our second home will make no sense.

Zhang Jiansong: You have just mentioned that studying Mars means understanding the Earth. The biggest issue we care about on the Earth now is the climate change. There will be a Future (Science) Forum at the Pujiang Innovation Forum on August 31, with the theme of innovation, co-governance and collaboration in climate change research. We are looking forward for your listening.

For more content, please visit www.ximalaya.com to listen to our program album "Nth Dimension of Parallel Future". Scan the QR code below to listen to this episode ~ 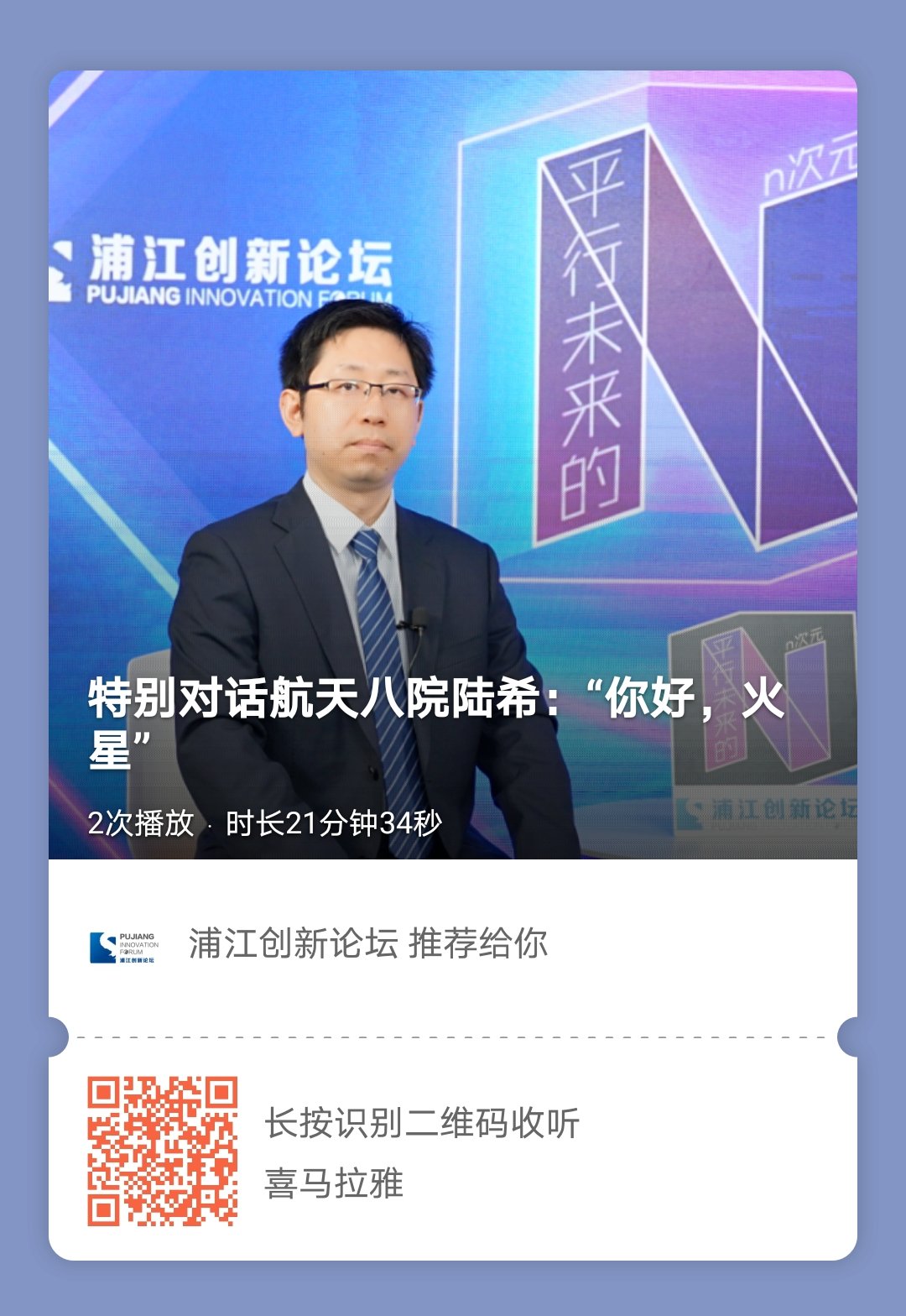 The short videos of the interview program will also be broadcast simultaneously on the official channel of Pujiang Innovation Forum in Tik Tok. Welcome to follow us! 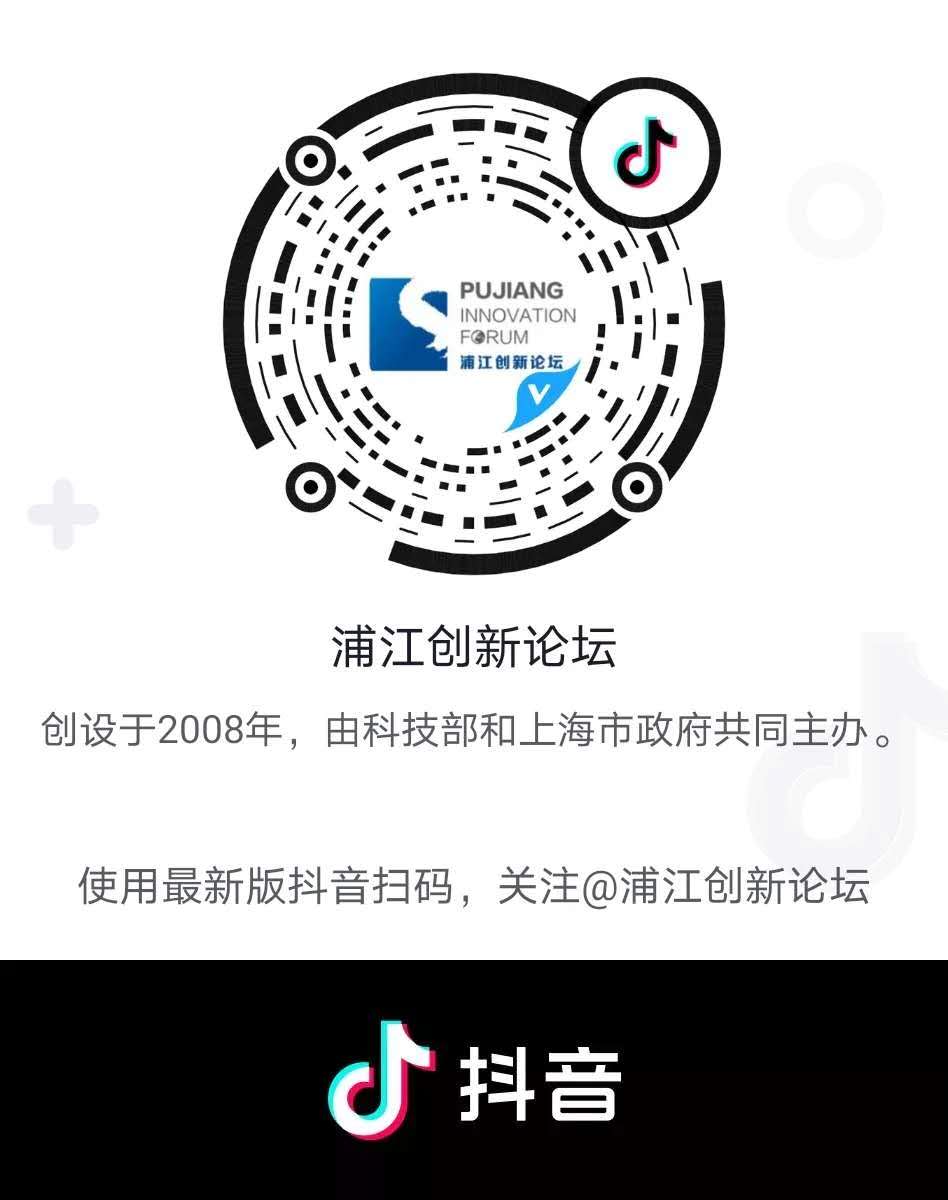