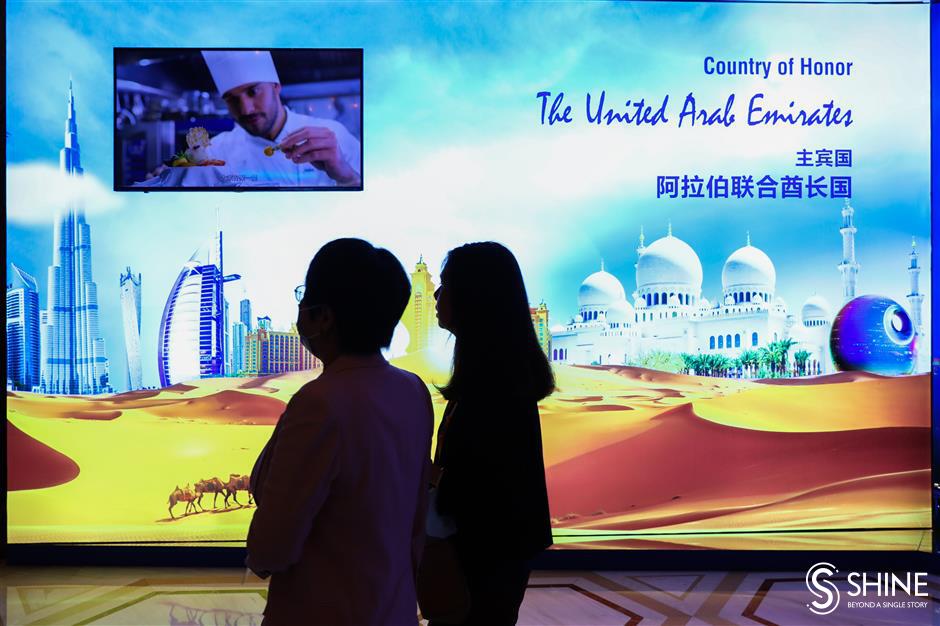 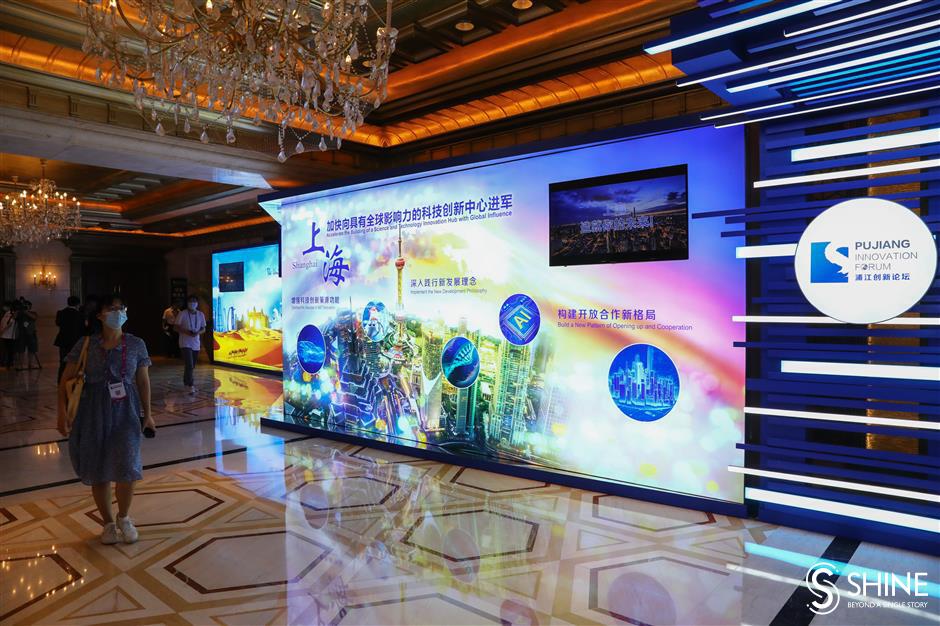 The 2021 Pujiang Innovation Forum held a plenary session on Thursday afternoon at the Dongjiao State Guest Hotel under the theme of "Innovation for A Better Life for Mankind."

The center, considered the engine room of the national strategy of realizing integrated development of the Yangtze River Delta region, will give fresh impetus to the region's development to become a global innovation hub and future industry highland.

It will give full play to the region's innovation resources, advantageous industries and strong research and education presence.

It will focus on three major fields – integrated circuits, artificial intelligence and biological medicine – as well as key industries such as electronic information, new energy, new materials and high-end manufacturing.

It will help transform findings to products and make breakthroughs in key technologies to push industries up the global value chain.

Wang said science and technology makes for a better life, which echoes this year's forum theme. 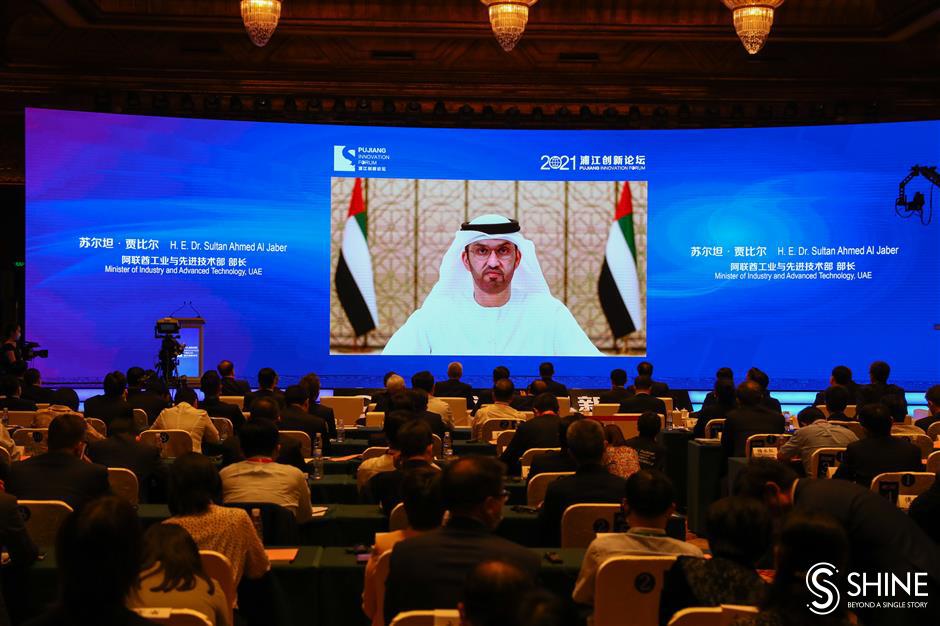 Dr Sultan Ahmad Al Jaber, the UAE's industry and advanced technology minister, emphasized the role of innovation and cooperation in today's world in a video speech. The UAE is the forum's Country of Honor this year.

"As the world continues to change at an unprecedented pace and as new technologies continue to disrupt the way we live and work, building an ecosystem that stimulates innovation is no longer optional. It is essential for countries to compete, to succeed and to fulfill their economic potential," he said.

He added: "In the UAE, we have learnt that innovation doesn't happen in a vacuum. It is what comes to life when the best minds work together on a single problem. It is why we encourage cooperation beyond our borders. Together we are smarter, more agile." 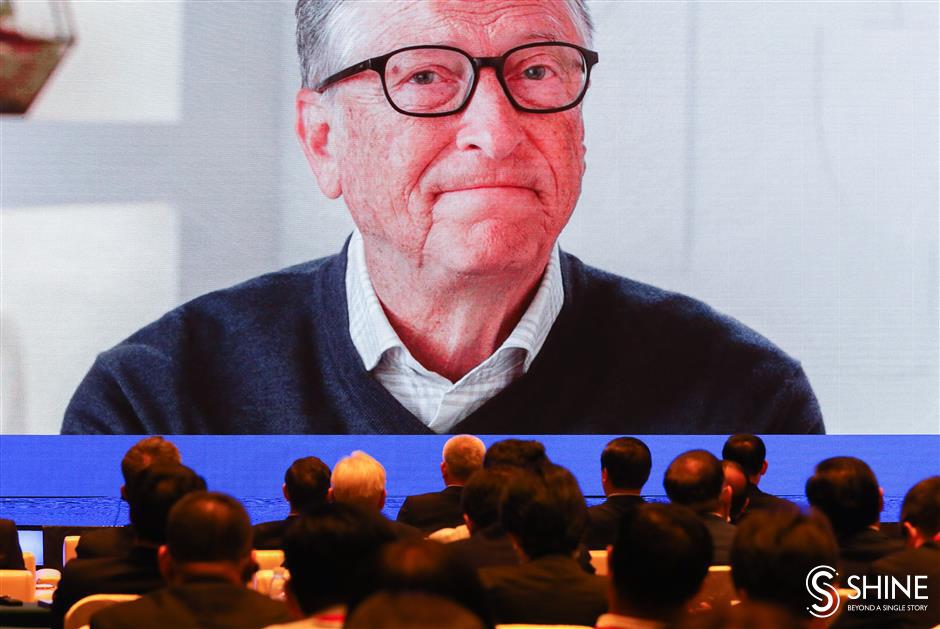 "China has emerged as a major global force for inclusive innovation. Its increasing investment in scientific research, as well as its efforts to ensure that new ideas and tools become effective public goods, have helped save and improve hundreds of millions of lives, both in China and beyond," he said.

He added: "I believe China's long and robust commitment to inclusive innovation will help the world bring the COVID-19 pandemic to an end more quickly. I hope to see COVID-19 vaccine supplied from China increase and play a significant global role."

Gates cited Nobel laureate Tu Youyou's discovery of artemisinin as one of the most significant breakthroughs in tropical medicine in the 20th century. Her work saved millions of lives that would otherwise be lost to malaria.

"Today, China has registered four consecutive years of zero indigenous cases. True to the spirit of inclusive innovation, and even as the disease recedes within its own borders, China's commitment to defeating malaria worldwide continues," he said.

Many years ago, the foundation turned to China to seek safe, affordable and effective single-dose vaccine against JE, the main cause of viral encephalitis in Asia killing or disabling thousands of children every year.

Developed by a Chinese manufacturer, the vaccine had already immunized 200 million Chinese children since the 1980s. So the foundation reached out to the manufacturer.

"We met with the team to discuss if we could help them get their vaccine approved by the World Health Organization and scaled up for use in other countries. They immediately said: 'Of course we'll do it. Whatever you need,'" Gates said.

The JE vaccine passed WHO prequalification in October 2013, paving the way for global use. As a result, more than 400 million children outside China have been protected from death or disability due to JE.

The JE success has created momentum for more Chinese vaccines to get WHO approval. Today, three other Chinese vaccines – addressing influenza, polio and hepatitis A – have been qualified and are now available to countries in need, he said. 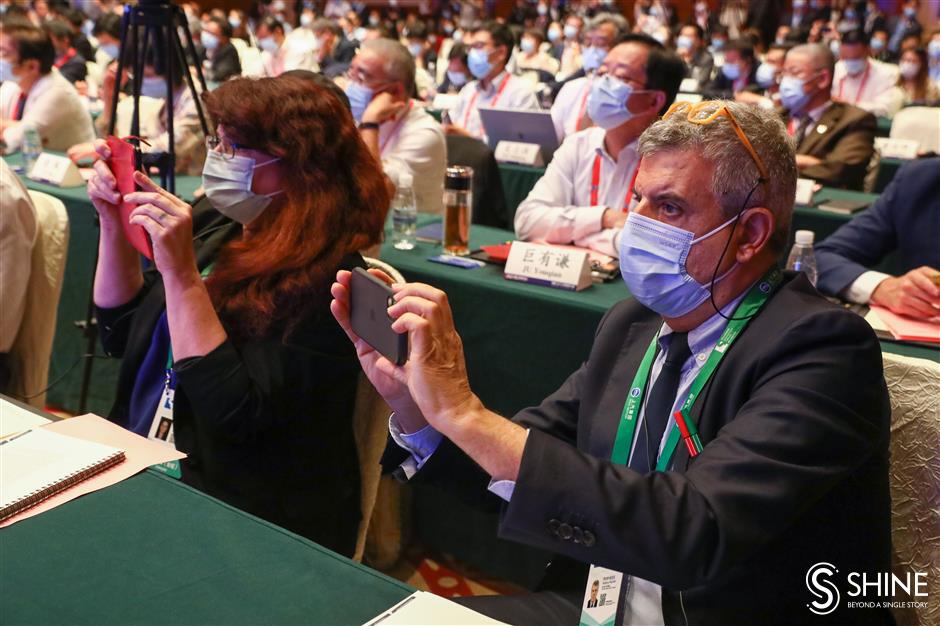 A section of the audience at the 2021 Pujiang Innovation Forum plenary session.

Bernard Lucas Feringa, a Dutch synthetic organic chemist, said: "It is crucial that scientists at universities, industry, society, everybody corporates and joins forces to make it possible that we go beyond our current frontiers."

He added: "The main challenges are, of course, to make a sustainable society, to take the discoveries that we make every day in science and engineering and bring them forward to a very good society where we have real innovations, where we have life, a great life for everyone."